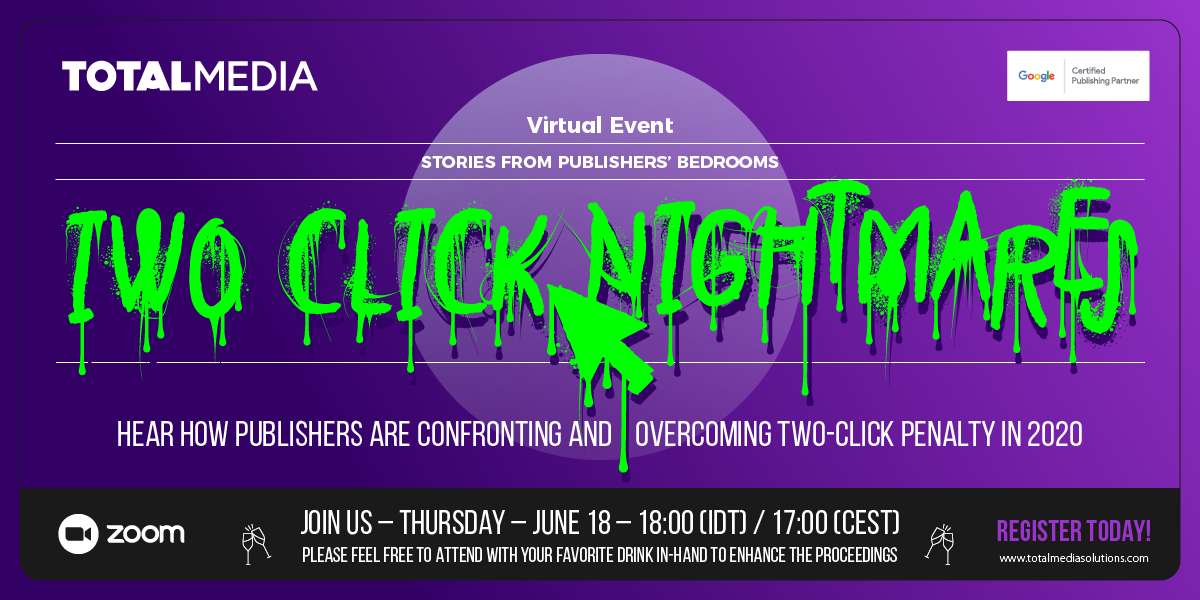 Ben: That’s that’s really good. So if we go back to Abishai, just to kind of finish up and ask you the same question that we asked Angie at the end… What kind of quick wins would you have for publishers that may be suffering from Two Click now?

ASB:   Reassess your site as if you are a user who never visited your site and you might surprise yourself.

Ben: Great stuff. That’s really good. Thank you. Thank you very much for your time and for joining us. And kind of go to Ryan and see if you’ve got kind of any additional questions or inputs.

Ryan:   Absolutely. I think that going off from what everyone has shared today. It’s a knowledge of what your content looks like. How your website feels. Is it a good experience? Is it a positive time? It’s not just the elements on the page. It’s how the experience is. And that knowledge is married with the policies. As we learn from them, we can understand about where things should be or how things should promote good usership. And that’s the business we want to be in. We want to be able to make sure that everyone is playing nicely and being upfront. And part of the Two Click is, it’s a learning game. We get to learn from it something new, and we learn something from ourselves.

Ben: Right. So we’ve got another question from one of our guests. So when Two Click is applied, is it applied to specific pages, specific users or to an entire domain?

Ryan: Two Click comes in different shapes and forms. It doesn’t attack one ad unit. Doesn’t attack any specific users, or doesn’t necessarily have to be the whole domain. We’ve seen it come and go in different ways. It requires a… It’s a probe that gets you deep into everything that you’ve got going on.

Ben: That make sense. Angie, do you have anything to answer in terms of your input into those questions?

Angie: Yeah, just really echoing what Abishai and Ryan is saying, I think you’ve just got to keep your finger on the pulse. You’ve got to make sure you’re on top of your stats, your data, and just picking out anything untoward because that’s literally how I picked it up. I saw something strange with our ctrs, with our revenue. And that prompted the investigation because it just was too significant for it not to be something. Something had happened with… And it was just really the data informing us. So yeah, just keep your finger on the pulse at all times.

Ben:   Absolutely. So obviously now you work with numbers of difference of publishers. And in your own, kind of as a consultant, do you think, do you find that it is something front of mind for publishers?

Angie:  It is for the publishers I work with because I’ve experienced Two Click and I also have worked very closely. I mean, I’ve made myself very familiar with the better ad standards and what is required. And yeah, I agree with Abishai, I think if you are using your site as a user, you can vary. And if it’s not pleasant for you, because quite often we detach ourselves as being a user, we are looking at website, our own content from a different lens almost. But coming at it from a user should highlight if it’s pleasant or not, and what your potential users are experiencing. But yeah, just that really, what Abishai said, I totally agree.

Ben:  So being around user do you also… I mean, obviously, you’ve worked from publishers of different scales. Do you see that as being an impediment to it working quicker, and potentially rolling out better UX and UI, and is it easier as a bigger publisher to get that feedback from your users in terms of, when something that you might have rolled out in terms of the UX isn’t working?

Angie: Again, if you’re following the guidelines provided, because if you look at the guidelines provided in the Better Ads Standard, it’s all common sense stuff. You know, we know from being in the industry for many years, pop ups were annoying. You know, just those ads that cover content over in a window, all of that. And I think if you follow those guidelines, you will be set up in the best possible way. In terms of… And I think anyone working with revenue and operations should be working very closely with their product teams, dev teams, and just making sure all of this is front of mind when doing any kind of work on your sites.

Ben:   Absolutely. And I know that we we touched on it when we talked earlier in terms of you sinking the teams. But how well do you think… Obviously because UX is a discipline in itself for big publishers and development, and all the teams that don’t necessarily… They understand the guiding principles of good UX and UI, but they don’t necessarily understand the impact that it has on the ad ecosystem and on policies from not just Google but from other domain partners.

Angie: Yeah, I agree. I’m not sure… I’m quite inclined to say, unless you’ve experienced it, you’re probably… Ads are probably going to be at the back of someone’s head. They are just boxes around that need to fit in, somehow, in with the bit. And content is the key thing here. Those boxes that have to display ads are quite usually an afterthought. So yeah, I don’t know if a lot of publishers do… I suppose the big ones do. But I’m not sure if every publisher always has ads at the forefront of their minds and what a good ad experience should look like.

Ben: Absolutely. That’s something we try and work with our publishers when we onboard them in terms of, “Okay, how we think of designing the ads well so it’ll fit in with that good flow of the sites.” So yeah, I think that’s really good. Ryan, how about you? Any tips?   Ryan: I just wanted to re echo again, like what both people are saying is really what you want. You want that combination. And you want people to be looking at it, your projects from all different hats. So the people you have in UX come over to the REVS. Everyone to kind of share in it to kind of understand what we’re all working towards. Because it’s very easy for each group to get stuck into their one side of what they’re dealing with and what they’re managing, and with their goals and It’s a unified project. So to keep everyone on the same page, it’s definitely not just policy safe. It’s revenue safe.   Ben:                   Yeah, absolutely. It’s what we try and do internally as well as to make sure that everybody has  an understanding of policy, user experience, best practice, that they’re able to kind of guide everybody in the organization internally, and also, our publishers, when we work with them as well. Is there any other questions, bro?   Ryan:   No, maybe.   Ben:   So I think we’re pretty much kind of coming to the end in terms of what we’ve got in terms of questions and useful content. So I think it’s been a really good, useful, and insightful hit into what confirmed clicks and Two Clicks is and it should hopefully give some publishers the tools and some insight how to discover it on their site, and to work through post discovery in terms of getting through the issue, and a lot of it is. Part of it is to reiterate what everybody said, is it’s a process. So firstly, once you’ve discovered that it’s there, is to deep dive and see how much the impact is. See what might be impacting it, roll out those changes incrementally, and then wait, because it takes time for the algorithm to pick it up again, and for everybody to come and see that it’s okay. Absolutely as, as I’m sure that Google will be helpful to say, “Do not click on your own ads, because that’s not the way to see whether you’ve got Two Click.” And really, it’s something that’s going to be there in the ecosystem for a long time as part of those initiatives. The algorithm may change it. Hopefully will get smarter and more nuanced as we discussed, but the actual initiative will be there probably for a long time coming. So thank you once again to ASB and to Angie answering for joining us, I think your experience has been really helpful for the guests joining. Thank you for Ryan and the team that kind of helped put this together. And thank you to everybody for joining us. If you’ve got ideas or suggestions of what you want to hear on our next event, that would be really great.
Ryan:We’re going to be sending up the entire video in the coming days.   Ben:   Of course, Yeah. As Brian said, we’ll be packaging up the video and we’ll be posting that and sending out to everybody that joined for those that kind of missed bits here and there. So thank you very much for your time, everybody.
Angie:Thank you.
ASB:   Thank you.
Bye   [END]

5 Ways to Boost Your Website Monetization!
Neama Benhabib - Transcript from the Stories from Publishers’ Bedrooms Event – 05/21/2020
Here’s What You Need to Know About the New Ad Blocker in Google Chrome