Does Ads.txt Provide the Transparency We Need in 2021?

Home » Blog » Does Ads.txt Provide the Transparency We Need in 2021?

Ads.txt is four years old and it’s time we make sure that this toddler is growing up to be a responsible adult.

In 2017 programmatic buying had been scaling unfettered throughout the ecosystem and the industry was faced with a growing challenge of mitigating fraud and opaqueness. It was also believed that non-direct deals were the primary cause for fraudsters to exploit through tactics such as domain spoofing.

To raise the level of trust in Programmatic media the IAB (Interactive Advertising Bureau) introduced “ads.txt.” The endeavor was to increase transparency between advertisers and publishers and to bolster more trusted relationships between all parties.

While the file has provided some confidence and efforts to root out fraud, it is not a perfect panacea and has become another avenue for fraud to enter, examples include Domain Spoofing, and larger Bot attacks (most notably the 404bot scheme link) pray on its imperfect features.

Any website can use an ads.txt file similar to the robots.txt file. The text file is available when an advertiser buys ads either directly from a publisher or an approved ad tech vendor.

Ads.txt is seemingly safe and secure because unlike other fraud prevention methods, the ads.txt file can only be uploaded by the owner of the website, which means that there is no way to edit a site’s ads.txt file unless you have the required permissions to do so.

Here is an example of what an Ads.txt file commonly looks like when accessed through its URL: 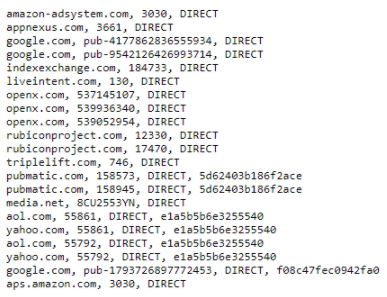 It is the publisher’s responsibility to regularly audit their ads.txt file to keep it current. There are examples of ads.txt files that do show the last updated attribution but this is not standard or required.

It is important to note that Ads.txt is not fully transparent in its design or execution as it never discloses which other SSPs or platforms in the chain these players are reselling of the same domain.

What we have seen is Ads.txt has been widely accepted. Which is a good sign for the industry that is in need for greater industry wide standards.  With the good comes the bad too and ads.txt has allowed us to let into the supply chain, false sense of transparency and vulnerability to fraud.

As of today, the IAB has not fixed the problems or gaps in ads.txt. However, the IAB has introduced additional initiatives such as sellers.json (2019) to create more robust checks and balances.

Sellers.json allows the identity of all points of a bid request to be discovered.  In time a buyers.json file could be introduced for publishers or app developers to gain visibility and control to whom they want to allow to buy their inventory.

At four years old, what we have seen from ads.txt is that it can be a valuable part of the added voice for transparency we need but it won’t get us all the way there. The face of a transparent ecosystem continues to be defined and evolved through every new step, every new file, tech. In the end, it all matters.

Google Announces Financial Support to Google Ad Manager Publishers
Publishers: How to Navigate These Uncertain Times and Come Out Ahead
Ads.txt Publishers Appear to be Winning Despite Heavy Financial Pounding